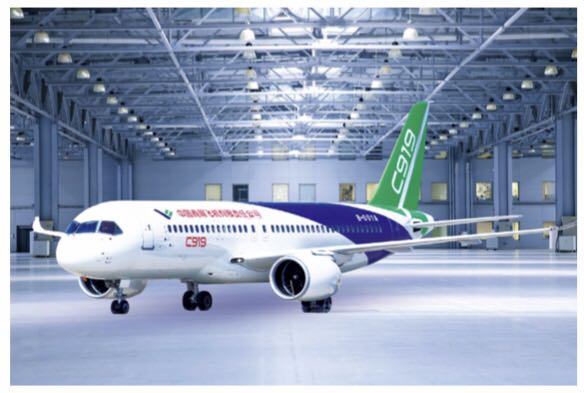 Ma Tianming is the CEO of Honeywell Aerospace. In his office in the United States, there is a shovel. Ma used this shovel in August 8, 2012 when the building foundation of Honeywell Boyun Aero Systems (HBAS) was laid in Changsha, Hunan Province. HBAS was established by Honeywell Aerospace and Commercial Aircraft Corporation of China to be a part of the C919 aircraft industrial chain. HBAS supplies carbon brakes for the wheels, tires and braking package on the C919 airliner.

C919 aircraft is a large civil jet aircraft independently developed by China in accordance with international civil aviation regulations, and owns independent intellectual property. It can carry 156 to 168 passengers in a normal operating configuration up to 4,075-5,555 km. On May 5, 2017, C919 made the maiden flight, which is a great milestone not only for Comac, but also for China and its entire global aerospace industry, and which also verified the correctness of the aircraft research and develop mode: manufacturersupplier symbiotic relationship. This mode is the result of the past forty years’ exploring in the civil aircraft manufacturing industrial, which makes different parties be able to share benefits and take risks together.

Some parts of the C919 aircraft are supplied by domestic suppliers, which include radome, nose, fuselage, wing, and more. Engines and airborne systems are provided through the cooperation between foreign suppliers and domestic companies according to customers’ requirements.

Sixteen joint ventures were established by suppliers around the world and Commercial Aircraft Corporation of China in the C919 industrial chain. Honeywell is a leading company in international aviation. Steven Lien, current CEO of Honeywell in AsiaPacific region, said“We are proud to be a major contributor to the successful first flight. We have been committed to supporting the emergence of a globally competitive aviation sector in China, and we look forward to extending our relationship with Comac for the upcoming long-range wide body aircraft program and more”.

On the Chinese Honeywell official site, there is a video introducing Honeywell and the C919 program. The video says, in November 2009, Honeywell and the Civil Aviation University of China (CAUC) was established in Shanghai to develop aviation industry talent; in April 2010, Honeywell was selected as the C919 auxiliary power units (APU) supplier; in August 2010, Honeywell was selected as the C919 inertial navigation system and air data system supplier; in August 2012, HBAS was established to provide brakes for the wheels, tires and braking package for the C919 program; in December 2013, Honeywell and Aviation Industry Corporation of China's Flight Automatic Control Research Institute established a joint venture to provide the flyby-wire flight control electronics package for the C919 aircraft; and in March 2017, Honeywell won the Performance Excellence Silver Award by Commercial Aircraft Corporation of China.

Honeywell has been cooperating with Chinese aviation industry for a long time. At the beginning of the 21st Century, Honeywell cooperated with Aviation Industry Corporation of China, Ltd. on the ARJ21 branch line aircraft program; and since Commercial Aircraft Corporation of China was established, the cooperation between Honeywell and China has gone further: they worked together on the design and development of the C919 aircraft.

According to a report on October 19, 2018 by China Aviation News, 815 C919 aircrafts have been ordered by 28 customers home and abroad. It is estimated that with the upcoming orders of 200 aircrafts by Hainan Airlines and Commercial Aircraft Corporation of China, the quantity of C919 order is likely to be more than 1,000 aircrafts.

The widely cooperation with international companies like Commercial Aircraft Corporation of China and Honeywell helps C919 to get more orders in the future, which will benefit all partners in expanding the international market.

The first step in Shanghai

The development of Honeywell can be traced back to 1885. This centuryold company provides high-tech solution for fields including aerospace, building technologies, safety and productivity solutions, performance materials and technologies, and IoT; it invents and manufactures technologies that address some of the world’s most critical challenges by taking advantages of cloud computing, data analysis, and IoT technology.

“Honeywell will always been with China, this great Dragon,” said a Honeywell employee. According to him, the activities of Honeywell in China can be dated back to 1935 when Honeywell established the first distribution center in Shanghai.

In 1972, when US president Nixon visited China, he recommended elite enterprises from ten major fields to come to China to promote China's modernization at the invitation of the Chinese government. Honeywell Universal Oil Products (UOP) was the only one selected in the petrochemical refining field. Now UOP has rapid development in China. In January 2018, a catalyst production line in Zhangjiagang invested by Honeywell is officially put into production. This production line is set up to produce catalysts in Honeywell UOP coalbased plastics process to meet the growing demand for plastics in the Chinese market. On the same day, a R&D engineering technology center was officially established in Zhangjiagang to support business development in Asia and meet growing engineering and technical needs.

Four business groups of Honeywell have been settled in China. Honeywell Asia Pacific headquarters are located in Shanghai, and has several branches and joint ventures in more than 30 cities in China.

Honeywell continues to help China's development by increasing its R&D

investment in China. Now Honeywell has 13,000 employees in China, 2,600 of whom are R&D members. In 2016 Honeywell invested $100 million in Zhangjiang, Shanghai to expand its Asia Pacific headquarters and China R&D center in Shanghai, and the Shanghai R&D office space increased by 50%. At present, with more than 2,600 researchers, Honeywell has set up R&D centers in Beijing, Shanghai, Nanjing, Suzhou and Xi'an.

Honeywell puts forward the idea of“Chinese-style competitors”, and regards China as part of the global business so as to better utilize China's domestic strength to develop products for China.“The vast capacity of the Chinese market and its diversified form provide an ideal platform for the development and growth of various Chinese companies,” said Honeywell. Since 2010, Honeywell has stopped comparing itself with other multinational companies, instead it compares with some powerful companies in China. They believe that if they can do better than Chinese companies, then they can definitely succeed in China.‍‍‍‍