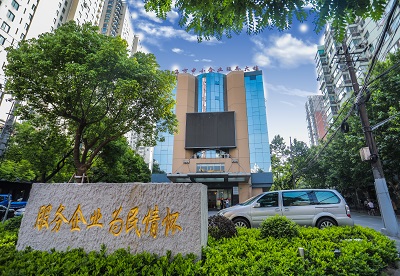 On the served table of Director Ge Dongbo of Shanghai Enterprise Development Service Center, a crystal medal sent by Shanghai people's broadcasting station was displayed with the words"Airborne Enterprise Service Think Tank" to thank the"Shanghai Enterprise Service Cloud", which was officially launched on January 1, 2018, to do substantive service for enterprises, deliver real outcome and provide more detailed services for the investment of small and medium-sized foreign enterprises in Shanghai.

Platform: government online"store" to promote the vitality of enterprises through system innovation

According to the the 19th CPC National Congress`s report,“Innovation is the first driving force leading development.” Strengthening the work of mass entrepreneurship and innovation is an important grasp of Shanghai's early realization of the goals of building“five centers” of economy, finance, trade, shipping, and technology and innovation. It is also the important carriers of four major brands,“Shanghai Service”,“Made in Shanghai”,“Shanghai Shopping” and“Shanghai Culture”.

Enterprises should innovate and government work should also innovate. In the second half of 2017, the Shanghai Municipal Party Committee and the Municipal Government successively issued [2017] 38 and 72 document, requiring that the"Shanghai Enterprise Service Platform" be used as the diversified and online carrier for the overall planning of the city's enterprise services and the optimization of the business environment. Online construction of"Shanghai Enterprise Service Cloud" and offline construction of Shanghai Enterprise Service Center are aimed to provide services with precision, fallback and full coverage to enterprises of all kinds of scale, ownership, whole life cycle in Shanghai. Shanghai municipal government required that the generalised system of preferences precision service system was basically established by the end of 2018.

Against this backdrop, the Shanghai Enterprise Service Cloud was officially launched this year. The website version launched officially on January 1, 2018, APP version on April 2, and WeChat version is to be launched soon.

"Shanghai Enterprise Service Cloud" is not a government website, but the first e-government platform in China. It is an attempt and breakthrough, and it makes the brand of"Shanghai Service" famous in the field of enterprise service.

By November 2018, the number of registered users on“Shanghai Enterprise Service Cloud” website and app has reached 367,000 with 3.117 million visits, 372 service stores of government departments and social organizations, and 3200 service products of different kinds. The number of completed service orders reached 29,900 and solved business appeals has been more than 1300. It realized the goal of"making enterprise service as convenient as online shopping" and embodied the spirit of"being a good store servant for enterprise". It formed a deep influence among private enterprises, especially small and medium-sized private enterprises, and complemented with Government Cloud and Citizen Cloud and became an important symbol of Shanghai's innovative service model and the optimization of the business environment.

It is understood that the there has not yet been example of online"store" opened by government nationwide. Successful trial in Shanghai will result in replicable and popularized experiences and practices throughout the country.

Service: one stop, one door, one network

The related departments of the Shanghai Municipal Government found in the"Great Survey" that the problems that the enterprises reflected more mainly focused on three aspects: the first was that the complaints could not be accurately reflected, the second was the lack of access to policies, and the third was the difficulty of finding professional services effectively. Therefore the aim to build the"Shanghai Enterprise Service Cloud" is to focus on solving three problems and let enterprises have a door to complain, to apply for policy, and to seek for professional services.

One-stop policy service. Set up"Policy Declaration Today" column to collect preferential enterprise policies for declaration and declaration system in time of 38 government office, arrange them according to the reporting deadline in countdown sequence and collectively release so that enterprises no longer need to browse the websites of various departments. Build the"Policy Knowledge Base" which has collected 242 items of preferential enterprise policies under 9 categories. Companies can subscribe to policy based on 55 key words.

One-network professional service. Build a"Service Resource Bank", implement invitation system, select 10 types of quality service institutions including entrepreneurial services, investment and financing services, scientific and technological innovation, intellectual property and others on the cloud services. Enterprises can choose their own service and products through"Looking for Service" column; communicate online with service institution through"customer service"; enter the store of the institution and customer can apply for or purchase public or professional services directly; enter the"buyer's service centre" to obtain information on the progress of the service; after the service is completed, the enterprise can also comment on the service effect. The city enterprise service cloud implements credit management, it will upgrade or degrade the star level of the service institution according to the enterprise comment.

Develop environmental assessment. Open an"Online Evaluation Window" to guide enterprises to fill out questionnaires to evaluate the business environment, service effectiveness, policy effect and so on.

Web-weaving: a combination of online and offline services with multiple channels of communication

"The Regulations of Shanghai Municipality on the Promotion of Small and Medium-sized Enterprises, promulgated in April 2011, and the Law of the People's Republic of China on Promotion of Small and Medium-sized Enterprises, as amended on September 1, 2017, are applicable to all small and mediumsized micro-enterprises legally established in China. There is no distinction on the service object of government based on ownership." Ge Dongbo, the director of the Shanghai Enterprise Development Service Center under the Shanghai Municipal Commission of Economy and Informatization, stressed that the"Shanghai Enterprise Service Cloud" also benefited foreign enterprises."American General Electric's companies in Shanghai arranged staff to browse the websites of various government departments daily for fear of missing out on important policies. And now they can get authority information in time from enterprise service cloud."

"Both online and offline, horizontally and vertically, create an environmental ecological chain of business for enterprises of all kinds of ownership." Ge Dongbo said that government departments were willing to be"store servant" for enterprises, catch up with the highest international standards and the best level, create a new high ground for the business environment to enhance the creativity and competitiveness of Shanghai city and to make Shanghai Brand famous in the field of enterprise service.