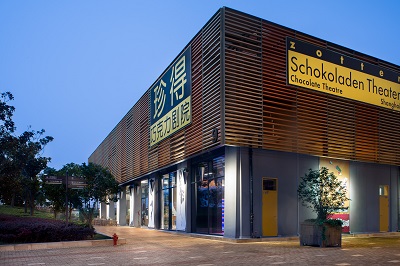 The booth of Zotter (Shanghai) Industrial Co., Ltd. is one of the popular booths in the food and agricultural products exhibition area of the first China International Import Expo. It not only has a booth area of 36 square meters, but also moved the chocolate workshop into the expo. The public can experience the birth of chocolate in the workshop and enjoy the world's top chocolates.

The world's largest series of chocolate

“At that time, a friend from Shanghai introduced me to the Expo, and the Consulate General of Austrian in Shanghai also introduced this expo to me. I think that the Expo will definitely be a good thing and should be attended.” Fang Yimin, deputy general manager of Zhende (Shanghai) Industrial Co., Ltd. Recalling the scene a year ago, I am very glad that I am decisive.“I planned to have a standard booth of 9 square meters. Then I found that the expo was very hot, and I took a booth of 36 square meters. Now it is very useful.” In fact, before the opening of the Expo, there were many companies home and abroad anxious to seek booths. They were regretted that it was too late to register and entered the Expo. Even if the companies got the booths, some also feel that the area is not big enough to display their products”.

One year ago, the Zotter (Shanghai) Industrial Co., Ltd. was able to be invited by many people owing to its industry status. The company opened in 2014, the guests who went to cut the ribbon included the consul general of Austria in Shanghai and the head of the Yangpu District of Shanghai.

Currently, the Zotter (Shanghai) Industrial Co., Ltd. opened a chocolate theater at the Shanghai International Fashion Center on bank of the Huangpu River. It covers an area of 2,000 square meters and has an investment of more than 6 million euros. This is a fantastic chocolate world with a complete chocolate workshop. In the workshop, the chocolate production process and crafts are displayed for tourists. Tourists can taste all kinds of chocolates, or make chocolates by themselves. This shows a kind of mode in consumption upgrade and business model innovation.

The Zotter (Shanghai) Industrial Co., Ltd. is originated from Austria's Zotter company, which is committed to producing high-quality chocolate. It can be traced from raw beans to finished products without pollution. It has developed more than 400 different flavors of chocolate, which is the largest series of Chocolate in the world. The Zotter is also listed top 25 chocolate manufacturers by the International Chocolate Experts in the world.

Attracting the global markets in the Expo

The Zotter (Shanghai) Industrial Co., Ltd., which has a booth of 36 square meters in the Expo, has introduced its chocolate theater into the expo. In the booth of expo, the production of chocolates was visible to consumers, which could help visitors got a real sense of the chocolate, scented and tasted the chocolates.

Zotter (Shanghai) Industrial Co., Ltd. and Austrian Zotter Company won a new round of empowerment and assistance at the Expo. The company has already foreseen the empowerment and assistance of the Expo. On July 25, at the one-stop service signing ceremony that was jointly organized by Orient International (Holding)Co., Ltd. and Business Committee of the Changning District, Shanghai, Mr. RudiMessner, general manager of Austrian Zotter Chocolate Co., Ltd. said,“(Zotter) has attened the expo and smoothly entering the Chinese market, which brought not only Chinese market, but even the global market for Zotter.”