Photo taken by an infrared camera shows two pandas entwined themselves in a fierce brawl around midnight between Dec.9 and 10,2020.(Giant Panda National Park/Handout via Xinhua)

CHENGDU,April 15(Xinhua)--Wildlife authorities said they captured rare video footage of two pandas engaging in a wrestling match so fierce that it left one panda with a bloody face.

The 17-minute face-off happened around midnight between Dec.9 and Dec.10 on a snowy field with snapped saplings at the Haoziping sanctuary in Pingwu County,southwest China's Sichuan Province,according to the Giant Panda National Park.

The video clips,retrieved from infrared cameras,showed the two endangered bears mauling each other's heads,performing wrestle holds and entwining themselves in a single ball of black-and-white fury.

In one clip,a panda was pinned to the ground with clear bloodstains on its face.

Photo taken by an infrared camera shows the two pandas engaged in a fierce wrestle around midnight between Dec.9 and 10,2020.(Giant Panda National Park/Handout via Xinhua)

Experts said the gender of the wrestlers was yet to be determined,but judging from their fighting styles,it was likely to be two males vying for a mate.

"Wild pandas usually snarl when confronting each other or vying for territory.Fierce tussles only happen in mating season,"said Zhang Hemin,a panda expert with the park.

Zhang said mating season fights can happen when a male panda tries to force itself upon a female,but the intensity of the fight suggested it was more likely between males fighting for a chance to mate a nearby female.

Though December is somewhat early for pandas to be in heat,previous field observations have recorded such occurrences,he said.

The expert said this mating season has seen frequent discoveries of panda mating sites."This indicates the strong fecundity of the wild panda population and that their habitat has been effectively protected."

Zhong Junde,a chief wildlife patroller at the Haoziping sanctuary,said after the sighting of the tussle,his team searched through other infrared images but did not find any trace of the injured panda.They plan to expand the monitoring area to track its whereabouts.

“Xinxing”, the oldest captive giant panda in the world, has passed away

“Liangbang”, a giant panda living in Japan, has successfully given birth to a baby with the help of experts from both China and Japan.

Bundles of joy! At research base, a glimpse of giant pandas born in Chengdu in 2020 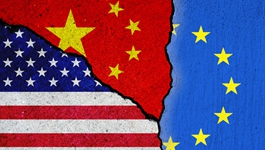